Chains And Freedom:Or, The Life And Adventures Of Peter Wheeler, A Colored Man Y | University of Alabama Supply Store

Chains And Freedom:Or, The Life And Adventures Of Peter Wheeler, A Colored Man Y 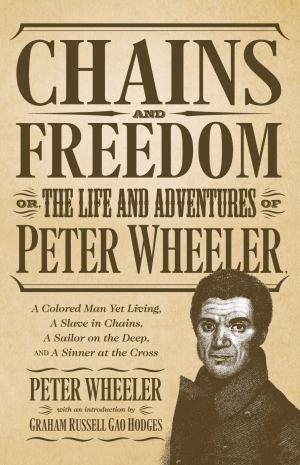 A very early example of the escaped slave memoir genre and a rare account of northern slavery.
The slavery narratives of freedmen were a staple in the armamentarium of American abolitionists, since the narratives' authors could testify directly on the evils and hardships of their servitude, putting the lie to the claims from slavery advocates that the practice was humane and beneficial to its subjects. They also added appeals to the principles of religion, making a powerful argument against the toleration of a system of human bondage.
What makes Wheeler's 1839 work a very interesting variant from the standard treatment is that he was northern-born--in New Jersey--and illegally sold and taken into New York State, then grew to adulthood held in slavery in the newly settled region of western New York. His memoir is direct evidence that slavery was not merely a southern aberration, but could and did happen very close to the homes of the northern audiences for such accounts. Wheeler's narrative of his work in the farms, canals, households, and seagoing vessels he served on are also unique in their coverage.
At the same time that abolitionists used slave narratives to substantiate and illustrate their position, deniers and apologists of the time searched diligently for errors or outright fraud in such witnessing, hoping thereby to dismiss all such accounts as fabrications if only one could be found faulty (just as Holocaust deniers do now with testimony from the Holocaust). Professor Hodges shows in his introduction how dissension among abolitionists led to suspicion of Wheeler's editor/amanuensis, the white Presbyterian minister Charles Edwards Lester, and the near-total eclipse of Wheeler's account until today; this is its first publication in more than 150 years.