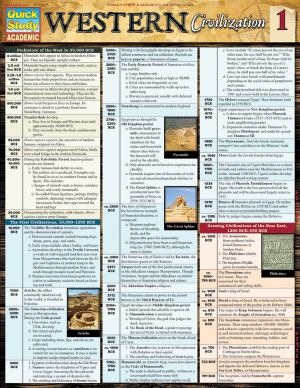 The most significant historical people, places, and events written by our experienced author and professor of history are laid out in a succinct timeline from 4 million BCE to 1500. In 6 laminated pages and with dates listed to easily find what you need, a frequent review of this guide especially before exams will boost your grade in any Western Civilization, Western Culture, or History course. For any history buff as well, there is no easier and more concise reference that paints a broad yet digestible picture of human history.
Topics covered include:
Prehistory of the West to 35,000 BCE
The First Civilizations, 10,000-1250 BCE
Growing Civilizations of the Near East, 1200 BCE-450 BCE
The Greek Polis in War & Peace, 750-371 BCE
The Greek World Expands, 359-142 BCE
Greek Culture, Science & Philosophy, 725-140 BCE
The Rise of Rome & the Republic, 753-31 BCE
The Roman Empire, 27 BCE-476 CE
Roman Culture, 240 BCE-121 CE
East & West in the Early middle Ages, 493-1000
Europe in the High Middle Ages, 1054-1400
The Culture of Christendom in Medieval Europe, 910-1351
The Emergence of Early Modern Europe, 1400-1497
The Culture of the Renaissance, 1304-1500
Suggested uses:
Quick Reference – instead of digging into a large book to find a core answer you need while studying, use the guide to reinforce quickly and repeatedly
Memory – refreshing your memory repeatedly is a foundation of studying, have the most significant points in history as a framework to anchor all other history