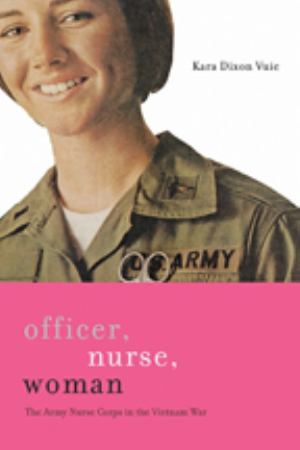 "'I never got a chance to be a girl,' Kate O'Hare Palmer lamented, thirty-four years after her tour as an army nurse in Vietnam. Although proud of having served, she felt that the war she never understood had robbed her of her innocence and forced her to grow up too quickly. As depicted in a photograph taken late in her tour, long hours in the operating room exhausted her both physically and mentally. Her tired eyes and gaunt face reflected th e weariness she felt after treating countless patients, some dying, some maimed, all, like her, forever changed. Still, she learned to work harder and faster than she thought she could, to trust her nursing skills, and to live independently. She developed a way to balance the dangers and benefits of being a woman in the army and in the war. Only fourteen months long, her tour in Vietnam profoundly affected her life and her beliefs."

Such vivid personal accounts abound in historian Kara Dixon Vuic's compelling look at the experiences of army nurses in the Vietnam War. Drawing on more than 100 interviews, Vuic allows the nurses to tell their own captivating stories, from their reasons for joining the military to the physical and emotional demands of a horrific war and postwar debates about how to commemorate their service.

Vuic also explores the gender issues that arose when a male-dominated army actively recruited and employed the services of 5,000 nurses in the midst of a growing feminist movement and a changing nursing profession. Women drawn to the army's patriotic promise faced disturbing realities in the virtually all-male hospitals of South Vietnam. Men who joined the nurse corps ran headlong into the army's belief that women should nurse and men should fight.

Officer, Nurse, Woman brings to light the nearly forgotten contributions of brave nurses who risked their lives to bring medical care to soldiers during a terrible--and divisive--war.