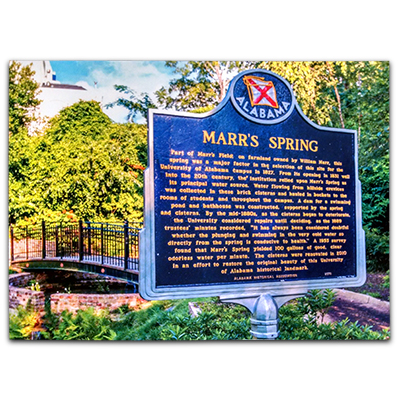 Part of Marr's Field, on farmland owned by William Marr, this spring was a major factor in the selection of this site for the University of Alabama campus in 1827. From its opening in 1831 well into the 20th century, the institution relied upon Marr's Spring as its principal water source. Water flowing from hillside crevices was collected in these brick cisterns and hauled in buckets to the rooms of students and throughout the campus. A dam for a swimming pond and bathhouse was constructed, supported by the spring and cisterns. By the mid-1800s, as the cisterns began to deteriorate, the University considered repairs until deciding, as the 1889 trustees' minutes recorded, "it has always been considered doubtful whether the plunging and swimming in the very cold water so directly from the spring is conductive to health." A 1955 survey found that Marr's Spring yielded 100 gallons of good, clear odorless water per minute. The cisterns were renovated in 2010 in an effort to restore the original beauty of this University of Alabama historical landmark.
Alabama Historical Association 2010.